Jim’s Garden is situated in rural Australia 🇦🇺 outside of Raymond Terrace. It features piles of wood as well as an annoyingly needy dog 🐕 that sounds deranged, however it was a good rest spot for getting used to the van. Though it was not a powered site you could walk into the house and use the toaster and kettle to get your breakfast and take advantage of the fireplace 🔥 10/10 would mooch for free again.

Clarence Town is a small town. If I was in the UK I’d call it a village but they’ve done me there by putting the word town in the name.

It had a shop, a hotel, a bakery and a nice little pizza place that even did vegan pizzas 🍕 which are somewhat of a rarity in Australia. If someone offers you the choice of a tomato and garlic base though don’t take it for the love of your breath.

Kurri Kurri (Kurri to Australians as saying the whole thing they named themselves is very anti-Australian) was a cool little stop over. I’m told they make delicious bread 🍞 but it includes dairy so… 🤷‍♂️ Anyway it was the home of the Big Kookaburra, a ten foot chucklehead statue and it also has lots of murals. 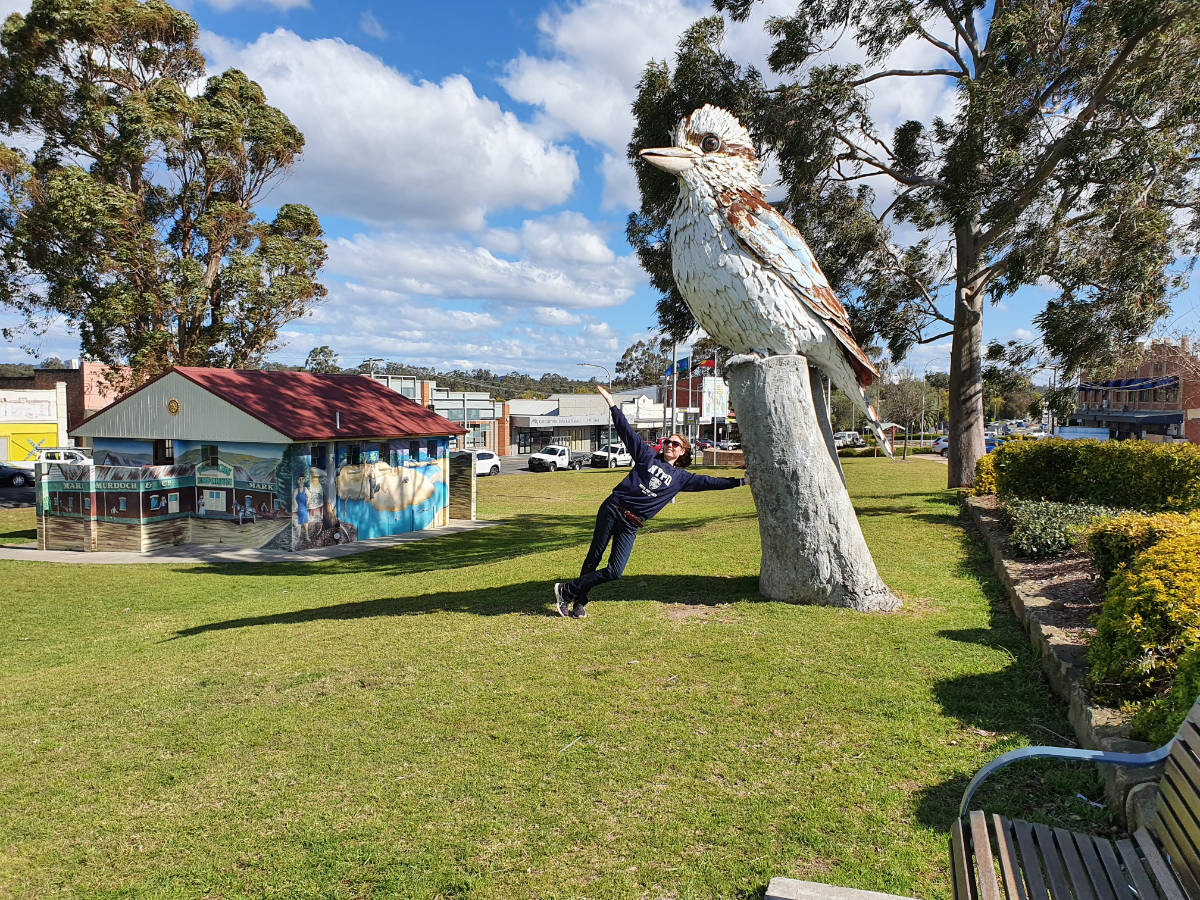 You can do a tour around the town and see them all if you head into the tourist information which is staffed by a lovely man and get a little walk around sheet 🗺 though the directions are a little cryptic. You’ll get there though.

Wollombi was in the hills leading into a national park and it was also the point the cold front took a turn for the worse. The village sort of reminds me of the aesthetic of the Peak District 🏞 I didn’t see much of the place as we stayed in the pub campsite and it was getting dark when we got there and I was stressing about gas leaking from our van. That said, it was VERY dark which was nice 🌌

Rylstone is 582m up (which is 1900 feet for my imperial loving friends) and we arrived in the dark during a cold front. It was cold 🥶 Negative numbers cold. It was pissing it down ☔️ The campsite sort of looked like it had been built on a garden. I didn’t really see much of the town because it was too cold to leave the van and we skidaddled early in the morning.

Kandos is near Rylstone. It’s an old mining town. It has some amazing thin and tall peaks where the volcanic rock in the mountains hasn’t eroded but the mountain around it has 🌋 It had a town museum full of things from the older days like an old, private mining corporation ambulance. The town name is an acronym of the names of the business owning old fellas who founded the town 🎩 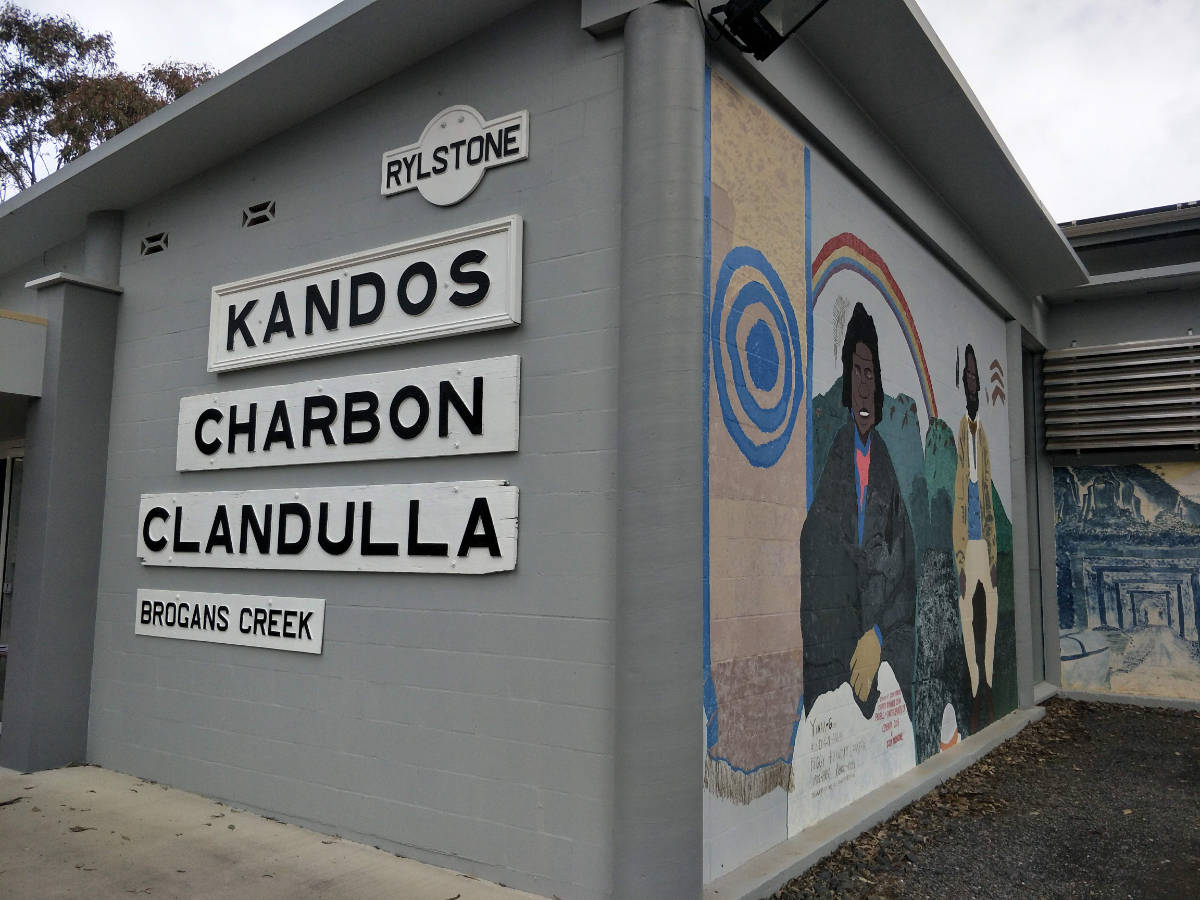 Mudgee is apparently the foodie capital of the state of New South Wales. Or that’s what they tried to tell me. I can confirm this is bullshit. Unless you are gluten free in which case absolutely everything was gluten free 🥖 Vegan and dairy-free do not register as even an afterthought. I did however walk from the campsite to town for some food in a pub 🍺 They accidentally gave me my dairy free burger with cheese and a brioche bun, though to their credit they gave me even more fries and the burger contents again and were very apologetic. Pubs here are interesting. Sort of a mix between a casino, a pub, a bar and a gastropub all in one building. I like them 👍

In Mudgee I also discovered the delights of The Reject Shop. This shop is like a Poundland sort of affair with random assortments of things for the home, garden and food. It was also our saviour as we were peak cold snap and everyone else had sold out of fan heaters. But not The Reject Shop. £15 for one. Heroes 🦸🏻‍♀️ They have since started selling Tesco food and drink to which makes them even more awesome.

This was also the point of the trip that I had to buy a puffy coat to keep warm 🧥 I had nearly survived the Australian winter without one but I caved. There was also a nice park along the river with sculptures in but also (and more importantly) exercise devices.

Whilst writing I was listening to...